Triage is a medical term referring to the process of prioritising patients based on the severity of their condition so as to maximise benefit (help as many as possible) when resources are limited.

Bug triage is a similar process where tracker issues are screened and prioritised. The triage process should help ensure that we appropriately manage all reported issues - bugs as well as improvements and feature requests.

Triage initially happens shortly after the issue was reported but it can be repeated later if the initial assumptions were wrong, the issue was resolved in another way, the affected versions need updating, or there are other reasons to review the issue.

Anyone can do triage in the form of correcting the components and/or affected versions, linking to related issues, and of course commenting asking for clarification, confirming bug, redirecting to the forums, and more. Users in jira-developers and moodle-triage groups can edit any issue, jira-users can comment on any issue or edit issues they reported. Please see MDLSITE-3592 if you are not a developer but would like to help with the triage process.

Adding the triaged label and placing the issue on the backlog should only be done by the component lead, or an HQ developer. Any user can remove the triaged label from the an issue, or replace it with triaging_in_progress if they want to request an additional triage.

First of all, identify the issues that should be closed or placed under investigation. Ask the following questions:

As a result of this initial screening, up to 20% of new issues may be closed. When closing the issues make sure to set the correct resolution and write a polite comment with explanation, refer to the templates below. If you have doubts, ask the questions and always add the triaging_in_progress label. Subscribe to the My old issues in triage filter and you will receive notifications after 30 days of inactivity on such issues. See Tracker tips about how to subscribe to filters. Often reporters never follows up on their own issues and this is a good way to find such issues. Ping the reporter again or make a final decision about closing.

When you confirm that the issue is indeed a bug or a reasonable improvement request that was not reported previously, make sure that the following is accurate:

Note that Fix version is no longer used during triage. If you are in the moodle-triage Jira group, you can use the Triage and sprint screen to edit only the aforementioned fields, see MDLSITE-3592.

When commenting on the issue give more details on replication, environment or testing. Ask questions, request screenshots, add watchers, modify the description if needed. Link to as many related issues as possible. Do everything that will make the issues scope more clear and attract opinions, discussions and patches.

Don't forget to show Gratitude and encouragement. After triaging many issues, it's easy to lose sight of the fact that the reporter has contributed their time and energy to report an issue for the benefit of the community.

It is easy to become defensive of Moodle if reports are seen as criticism (and sometimes reporters may use phrasing that suggests this), however the triagers response must always be one of sincere gratitude.

It is also important to encourage reporters to continue being involved with the issue after it is triaged. We must not give the sense that we are taking the issue ownership away from the reporter. Instead the reporter should be encouraged to discover the cause of the problem and present a solution; this is appropriate in an open-source project. It is amazing that such a challenge can lead to a sense of purpose for the reporters.

Following up on issues​

The Moodle Tracker is set up so that when you comment on, or edit an issue, you become an automatic watcher and any later changes to the issue will be emailed to you. This is a user preference and you can disable it if you prefer.

If you have encouraged the reporter well, they may submit a patch or somebody else may do it. Make sure that the patch label is added or the issue is sent to Peer review. If the patch label was added by somebody else but you clearly see that patch is far from ready, remove the label and leave a comment explaining it.

Users may also comment with additional details, screenshots, replicating instructions. It may happen that the issue gets re-evaluated and priority or summary changed.

While searching the tracker you may come over issues that were reported a long time ago but still remain open. Again, ask the following questions:

If users confirm that the problem was resolved, or if nobody replies in 30 days, you should close the issue.

Always create links between duplicates or related issues, whether you close an issue or not.

In the tracker, you'll find a few Canned responses in the Project templates section with some of the most typical messages you can re-use and adapt to deal with the previous scenarios. For instance:

You can search, re-use and adapt any of the messages in the Canned response selector, placed in the tracker editor: 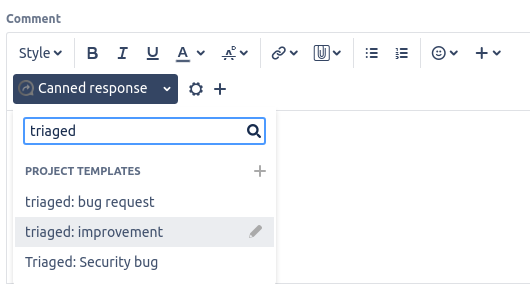 Triaging priorities and the Triaging Dashboard​

The following are the priorities for ordering issues to be triaged that are reflected on the Triaging dashboard.

Creating a filter and gadget for triaging​

If you are a component lead you are responsible for triaging issues that involve your component. A good way to monitor newly created issues is to create a filter in the Tracker and add a gadget on your dashboard to show the results of the filter.

How to add filters in the tracker

In the Tracker tips and tricks page you'll find how to create a filter and add it to a dashboard.